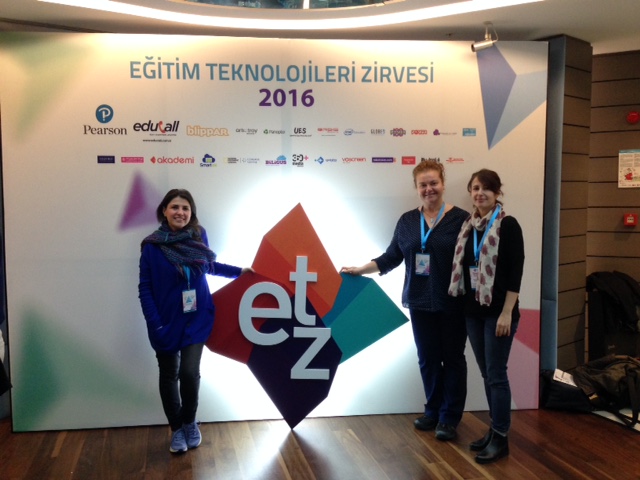 We arrived at the Radisson Blu Hotel in Şişli on a grey, dull morning in Istanbul. However, the mood outside juxtaposed with the one at the 3rd Educational Technology Summit. This year’s motto was ‘Get Inspired, Be Inspiring’ and it seemed to have a palpable effect on the swarm of people from the worlds of education, media and business.

This year Geveze, the popular radio host and entertainer, presented the event. In his opening speech, he referred to the myth of the Great Wall of China and how many people believed for years that it was visible from space until it was proved wrong by astronauts who went to the Moon. The point of his example was to pass on a message: When using technology in our teaching, learning and business practices, we should keep a critical and inquiring mind. He, then, went on to suggest that asking ‘why’ to ourselves while we are evaluating the technology in hand can be a good starting point. Why do we want to use technology? What will it bring to our practice, be it teaching, learning, media or business? These were apt questions indeed and this critical and reflective approach to using technology was prevalent in most of the sessions we attended on the day. 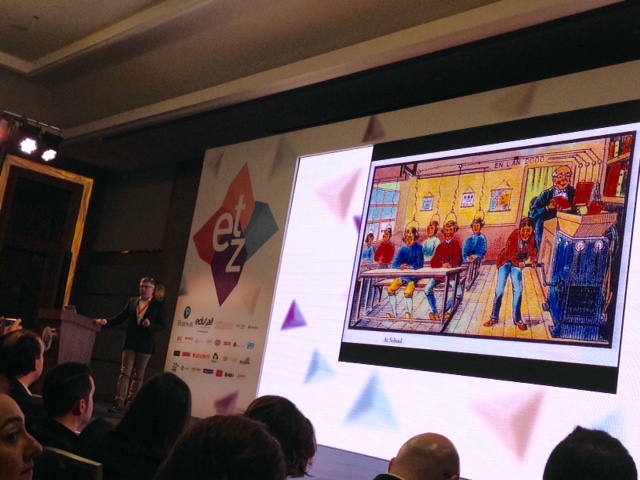 Oscar Stringer was the first keynote speaker. He is an Apple distinguished educator and education trainer. He also started out with questions aimed specifically at teachers: “How are you going to use technology? What do you want to achieve with technology?” He, in fact, used technology to receive answers to the latter question. People in the audience and viewers from around the world (the conference was broadcast live on the internet) responded to Stringer’s question using Padlet. He later discussed some of the main affordances of technology in teaching and learning. Encouraging independent learning and promoting creative learning were among his main arguments towards bringing technology into our teaching. He told the audience that if they took one thing from his talk, it should be two questions to answer before they set out to use technologies in their teaching: “What is your vision? What is your plan?” He also emphasised the importance of training and guiding teachers in their use of technology. Another interesting point he made was about the competence of our students as technology users. He said when it came to technology our students did not know more than us. They only look as if they do. This had echoes of Adam Simpson and Marina Dodigovic’s paper titled ‘How to Teach Generation Y with Technology’ and some of the issues discussed during the first SL Power-Tech session. Stringer also introduced a number of applications such as ThingLink, Blippar, Anatomy 4D and Tellagami and offered some practical tips to use them in education. 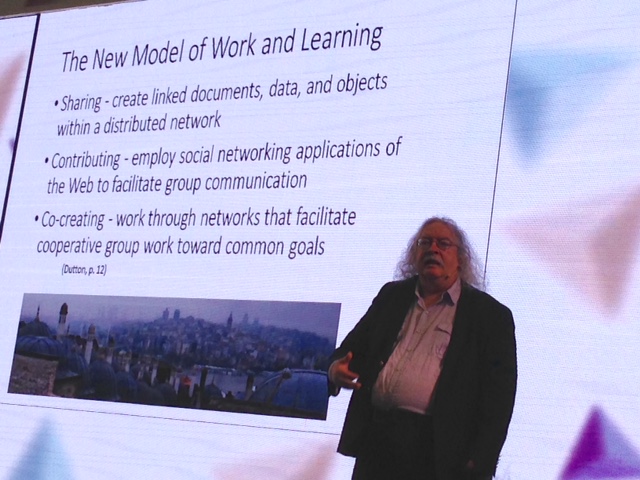 Stephen Downes was the other keynote speaker of the day. He is a leading proponent of connectivism and originator of Massive Open Online Courses (MOOC). In his talk he discussed ‘some of the common tropes of the future of educational media - learning analytics, mobile, etc. - and offer[ed] criticisms and an alternative account’. This keynote was truly an engaging one and the way Stephen Downes interacted with the translator was yet another highlight which impressed the audience. Here is the photo of the interaction to give you an idea (He asked “Are you a machine” and the translator typed ‘Makine misiniz?’ and then responded ‘No’- which warmed hearts). 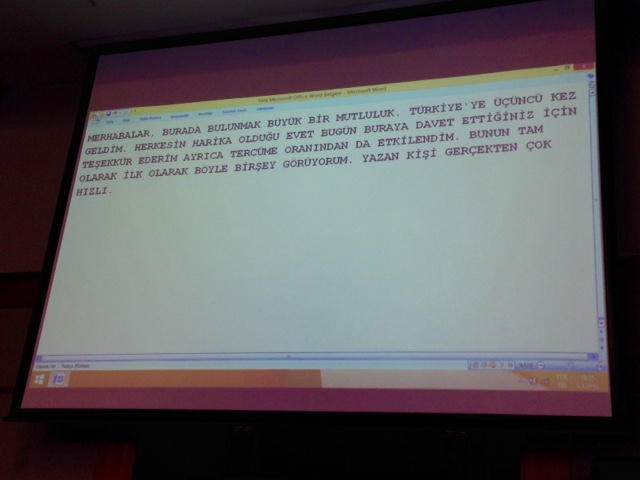 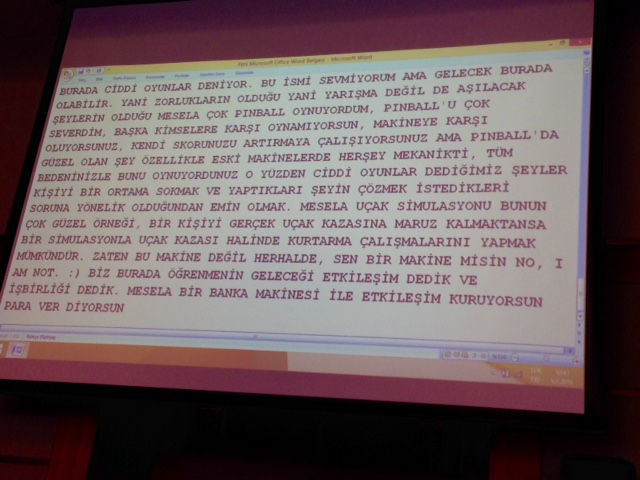 Below are some highlights from his talk. Although his talk focused on the future of educational media tools, these points and ideas can be applied to our use of technologies today:

·       The inflexible law of learning: It’s when we do stuff that we learn, not when stuff does something for us.

·       Communication is everywhere but the future lies in cooperation, not collaboration.

·       Just because it is interactive does not make it engaging.

·       Learning is personal (as opposed to personalised).

·       The new model of work and learning comprises sharing, contributing and co-creating.

You can find his slides for his talk here. 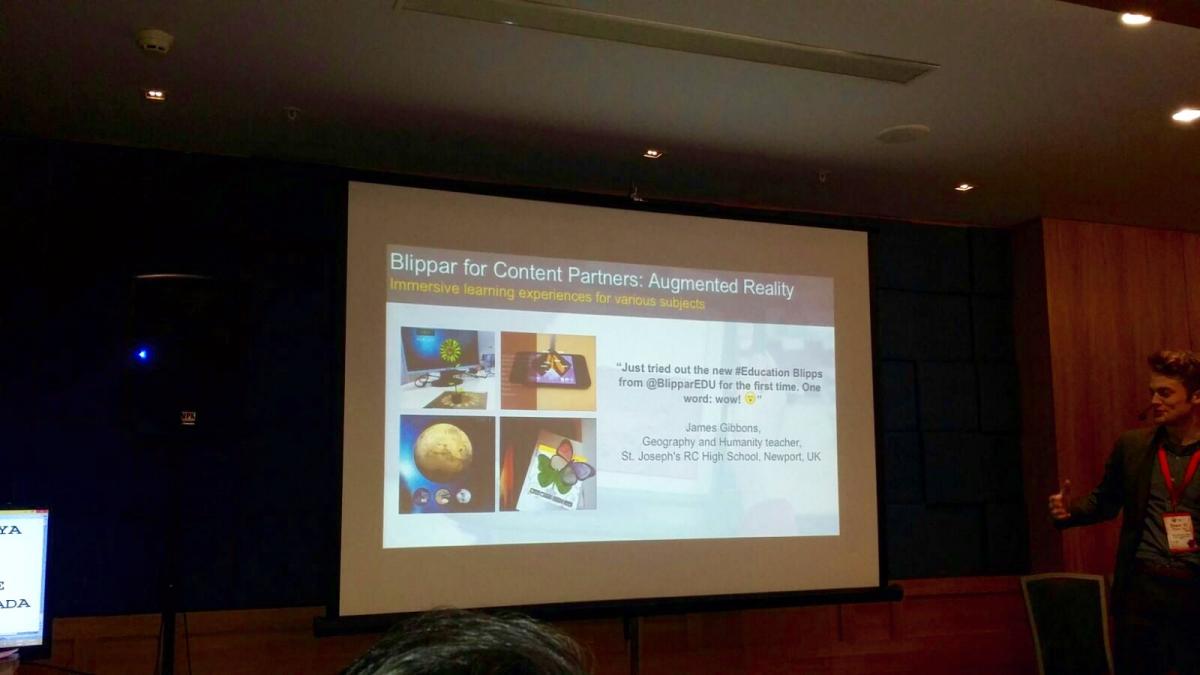 Colum Elliot- Kelly, head of education at Blippar, delivered a session on Augmented Reality (AR) in education.  Blippar adds digital content to physical objects. He believes educators can make a ‘genuine pedagogical impact’ by employing AR tools and enrich learning environments through immersive and engaging experiences. Immersive learning, in fact, was one of the frequently mentioned buzz phrases throughout the conference. Elliot-Kelly cautioned teachers against falling into the trap of using ‘gimmicky’ technology. We should, he said, always weigh the usefulness of a certain technology against our urge to use it because it is gimmicky or flashy. He said by using AR the aim is to create learning experiences for students they could not otherwise have. He also introduced the idea of enhancing physical textbooks with the key benefits of digital education; that is, creating “digitally-enabled” learning environments. “Leveraging, contextual, personalised and interactive learning environments created through a single app” were the key concepts which attracted the audience’s attention during this session.

Dr Selçuk Can Güven and Esat Uğurlu delivered a workshop titled ‘Ben bilmem BEYİN bilir- Education in the light of Neurobiology’. SL instructors may remember the presenters and their topic as they visited us in fall 2105 to introduce Achieve3000, their learning platform offering differentiated instruction tools to improve reading skills. They started with some of the new discoveries in brain research and linked these findings to the need of differentiated instruction. Achieve3000 is being piloted in SL Route 3 this semester. The workshop attracted a large audience and we had to sit on the floor but it was definitely worth it. 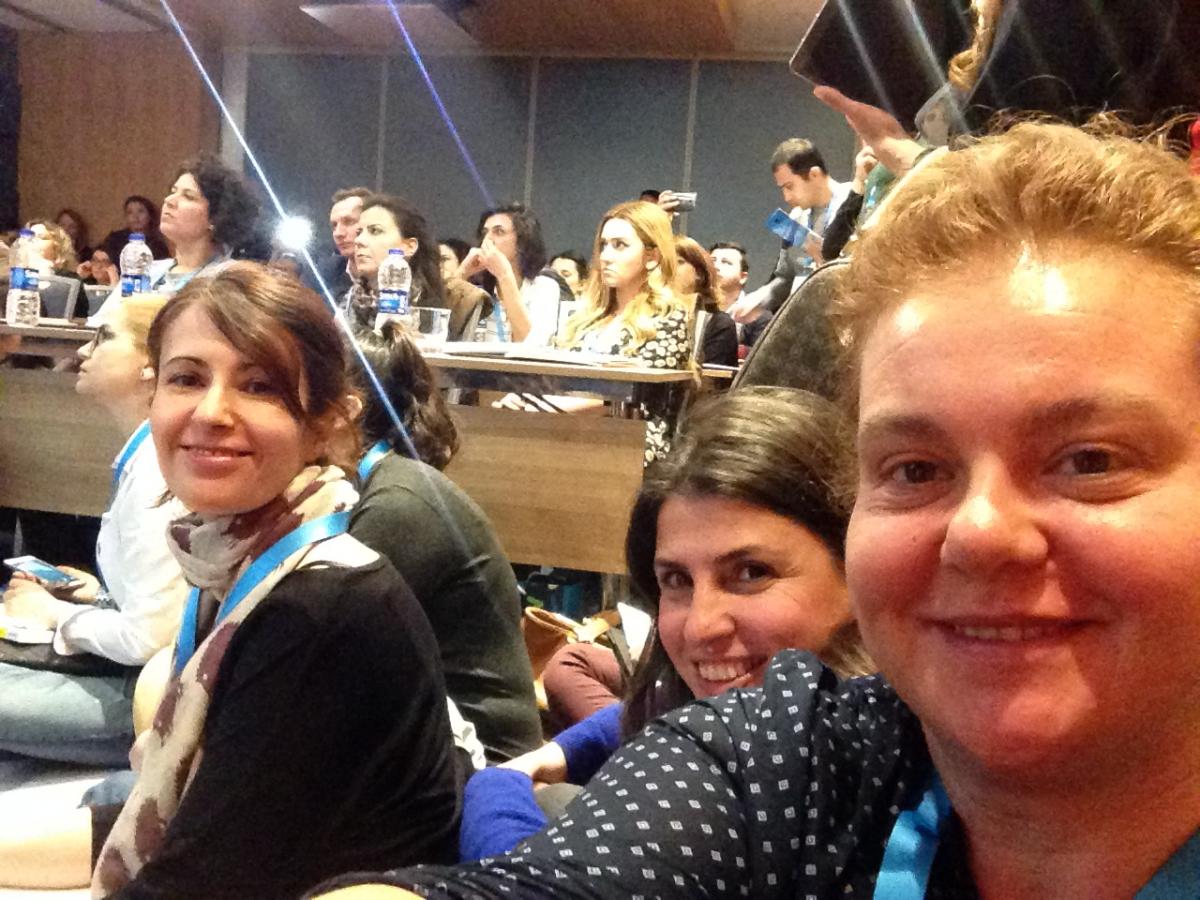 You can find more about Achieve3000 and how it works here.

Kayhan Karlı, founder of Innovative Learning Centre, delivered a talk titled ‘Teachers as Designers- Design Thinking’. Karlı believes we need to see learning as an issue of design. You can find the 5 phases of design he discussed in his talk here.

Karlı considers the skill of learning as the only 21st century skill. During his talk, he looked at the last hundred years through different approaches to learning- from J. Dewey to C. A. Tomlinson to John Hattie. Kayhan Karlı is an advocate of Hattie’s approach to feedback- feedback that feeds forward. Feedback, according to this school of thought, should create change. As for technology, Karlı believes that it is only a means to an end for teachers. We should use technology in an innovative way. To him, the 21st century teacher is an artist using technology as their canvas and the teachers need to be “makers”. He also emphasized the fact that feedback is only useful when it creates change. He ended his talk with an easy-to-remember acronym: IKEA. This is his formula for each and every class we teachers deliver. Our classes should be İlginç (interesting), Kullanışlı (practical), Eğlenceli (fun), Anlamlı (meaningful) 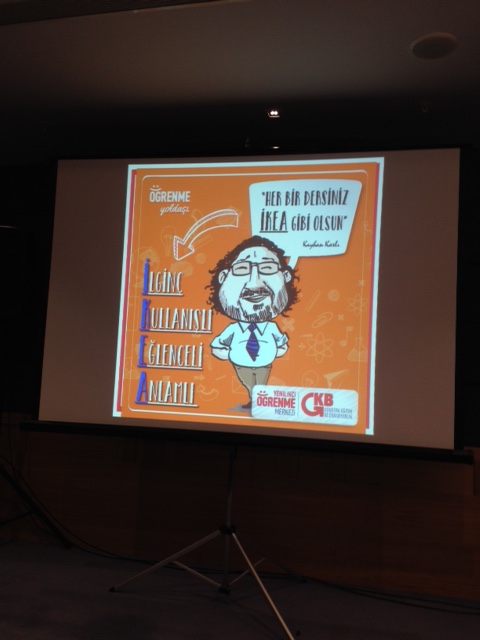 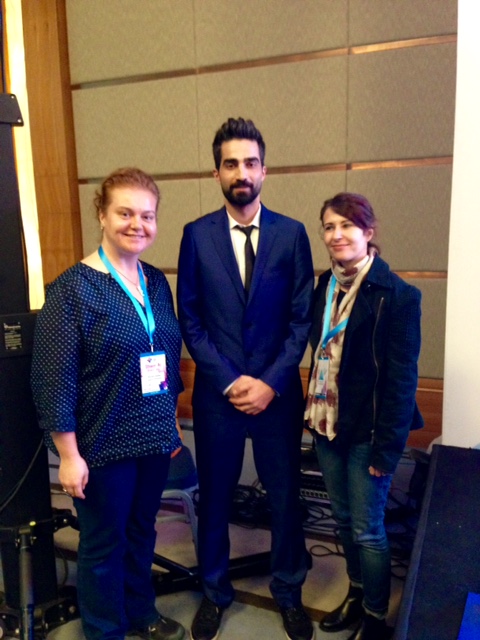 One of the late afternoon sessions was delivered by Ahmet Naç. Ahmet Naç is an energetic, idealistic and creative primary school homeroom teacher who believes in going the extra mile for his students. He has created, what we would now call, an immersive, engaging environment in his classroom, which has recently been in the news. You can see pictures of his classroom here. In his talk he emphasised that he was not a technophobe but he would have to be convinced that any technology would serve a clear teaching objective and fill in a gap in his teaching and in his students’ learning before he made the decision to use that particular technology. He later shared with the audience how he learned to create holograms and used them at his school’s Çanakkale commemoration ceremony. This talk was excellent in that it brought together two major themes of the conference:  inspiration and reflection. Having mentioned inspiration, Naç clearly expressed his gratitude for the true inspiration in life as a teacher, Mustafa Kemal Atatürk. He said if Atatürk could work on “Harf Devrimi” (The Turkish Alphabet revolution) during war time, could read that many books and plan so many details for the future, then there is no excuse for him, nor for any other teacher who is willing to make a difference, not to inspire others and to take the lead. This was definitely an inspirational talk which encouraged the audience to reflect on their own potential.

Ahmet Naç will be offering a talk as part of “Eğitimde İyi Örnekler 2016” Conference on April 2nd at Sabancı University. For those of you who may not yet have seen his TED talk, here is the link.

We also had the chance to experiment with 3D printers and also Oculus Rift, a virtual reality system that immerses you inside virtual worlds, which Globed introduced at ETZ 2016. It was also fun interacting with the robots presented by Gilbo. 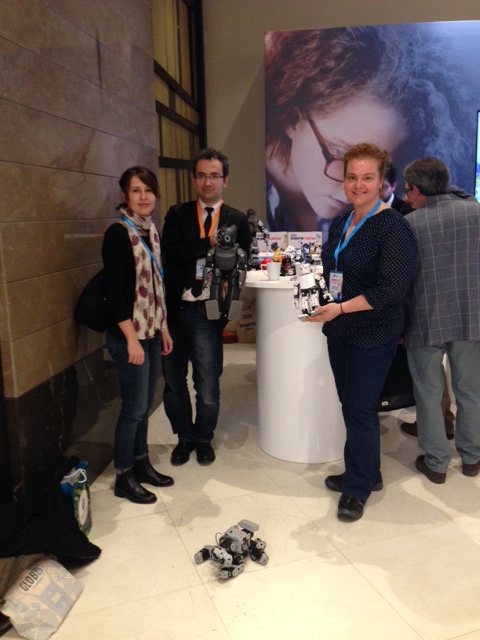