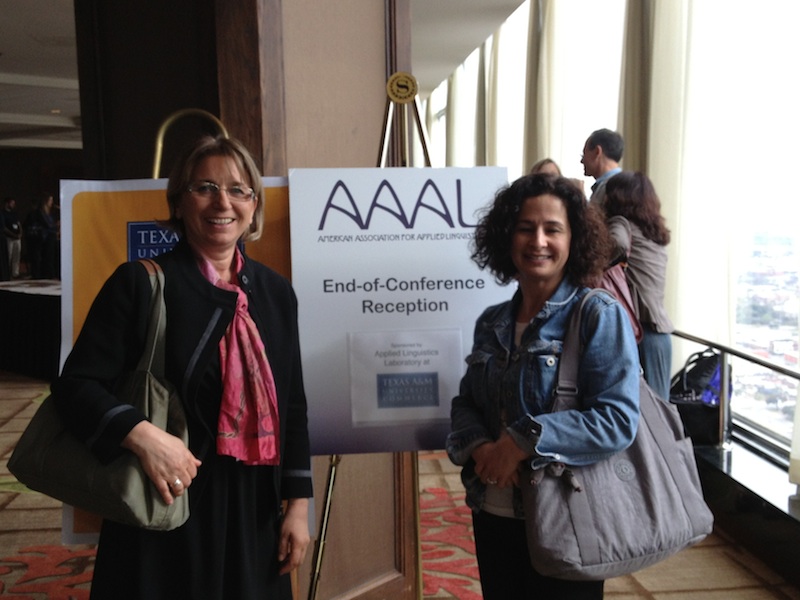 The Plenary speakers were William Hanks, from the University of California at Berkeley, Monica Heller from the Universite de Toronto, Srikant Sarangi from Cardiff University, Lera Borodistky from Stanford University, Brian MacWhinney from Carnegie Mellon University,  and Agnes He from Stony Brook University. William Hanks highlighted basic semiotic processes through which a new, distinctively colonial variety of Yocatec Maya emerged under Spanish colonial rule. In Yucatan, Maya was the language of both evangelization and governance, and was caught up in processes that can fairly be called linguistic conversation. Thousands of Spanish words and phrases, as well as an extensive corpus of religious texts and notarial genres were rendered in the native language, which was changed in the process.

Monica Heller’s talk was entitled: Re-imagining language in the globalised new economy: System, Resource, Practice. Heller claimed that competing ideas about language as abstract or cognitive system or as social practice as linked to universal humanity or cultural difference, to reason and the mind or to emotion, the soul and heart, have been with us since the dawn of industrial capitalism and the rise of the nation-state. She explored the 19th and the 20th century linguistics by outlining how tensions rose between structuralism and aestheticism, and standards and vernaculars, and so-called “internal” and “ external” accounts of linguistic form. The second part of her talk examined how these hegemonic ideas about language manifest themselves in contemporary late capitalism.

Srikant Sarangi of Cardiff University  had a three part plenary: first, he began with a distinction between intellectualism and expertise which he defined as the core value which guided professional practice. In the second part Sarangi revisited the “research on / for/ with” paradigms in social and human sciences research  to stress the different positioning  of the researcher  and the researched. The third part extended the reality /’with’ dimension beyond the researcher-researched positioning to role-relations between researchers collaborating across professional and disciplinary divides, rooted within ontological and epistemological orders. He defined this collaboration as marriage and elaborated the relational process in terms of joint problematisation, negotiation of interpretive procedures and provision of hot feedback.

Lera Boroditsky is from Stanford University and her talk was based on how the language we speak shape the ways we think. She has shared her research on how people who speak different languages think differently, whether the language we learn changes the way we think, whether polyglots   think differently when speaking different languages. Boroditsky  reviewed data from her experiments conducted worldwide and shared her interesting and surprising  findings that the languages we speak shape the ways we think.

We did a paper entitled “A Purple Teacher Education Program” which promotes and protects women's and girls' human rights. We shared our study that we have been conducting in collaboration with the Women Studies Unit and running as a component of Sabancı University “Purple Certificate program” for the last 3 years. We highlighted the following aims:

•Raising the consciousness of high school teachers and, through them, high school students in the field of women's human rights

•Creating a common "gender" sensitive language among the participants

•Focusing on the principle of "learning to learn", empowering and supporting high school teachers in gender sensitive educational strategies

We shared the follow up projects by teachers, what has changed, and examples of good practice.

We are happy to have represented our university by presenting a sociolinguistic paper at the AAAL 2013 Conference. Our session was very well received with high interest, numerous questions and positive feedback.