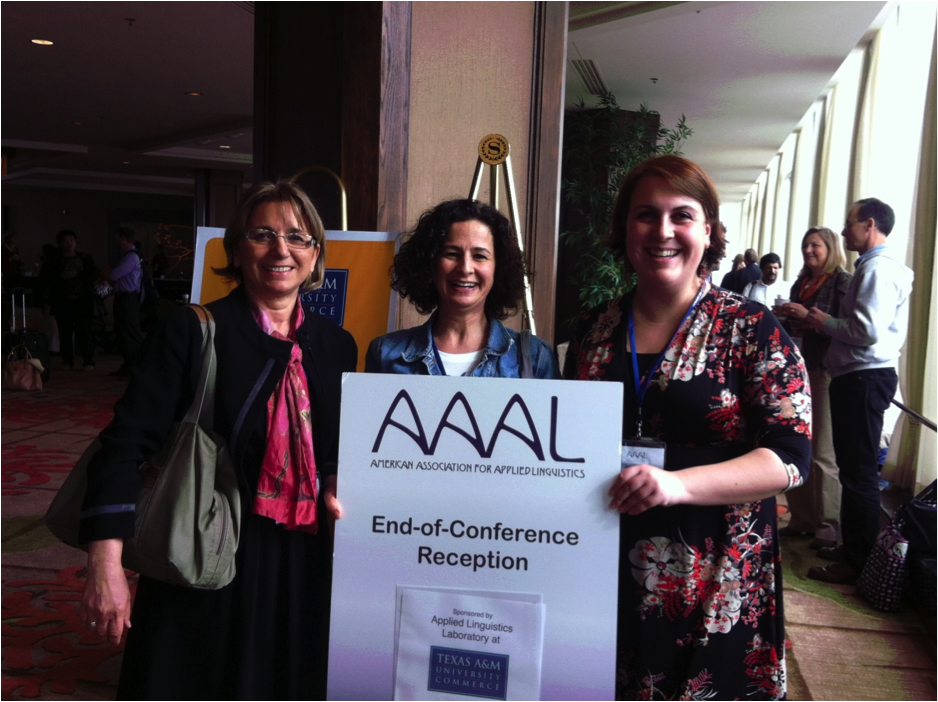 AAAL 2013 was held in Dallas, Texas with the participation of applied linguists worldwide. Having attended such an interdisciplinary gathering we feel we are back home feeling “validated” and “re-energized” in AAAL Past President Jane Zeungler’s terms. We shared certain ways of looking at and researching language. It is such an amazing environment where research and findings are discussed at every corner at any opportunity and this nature of the conference.  We did a session entitled “A Purple Project ‘to Promote Women’s and Girls’ Human Rights through Teacher Education”. We discussed a collaborative training program which encourages schools to prepare projects to increase awareness in and to promote gender equality in order to protect women’s and girls’ human rights in school districts. This is a program we have been involved since 2010 organizing seminars and conferences in various cities in collaboration with the Ministry of Education. We shared program components, follow up projects and examples of good practice in various parts of Turkey.

Lera Boroditsky from Stanford University did a plenary session on how the languages we speak shape the ways we think. She touched on cognitive science discussing how the idea of time is constructed. She asked the question “how do we construct the idea of time?”, and then she asked what special representations are available. She furthered her questions asking how left to right arrangement or concepts of  “earlier” and “later” are constructed in the brain and explained how response keys varied. Boroditsky stressed that when she said “the past is in front of you the future is behind”: a vertical metaphor vs a horizontal one. She claimed that it is a horizontal metaphor in English language but vertical in Mandarin. Her session was not only thought provoking but also very enjoyable.

The sessions we attended highlighted recent research on various areas of linguistics. The session entitled “The Relationship between the Use of Mediational Tools and Writing Performance in a Computer-supported Collaborative Writing Classroom” by Lin aimed to investigate the relationships between L2 writers’ mediation tool use and their collaborative writing performance. There were several types of mediation tool use identified. Findings revealed that the use of mediation tools did affect L2 writers’ general writing performance and their writing improved with their practice times.

Mark James from Arizona State University had a brief review of research on “English for Academic Purposes Instruction: What Learning Transfers, and how far?” He highlighted the transfer taxonomy referring to Barnett & Ceci (2002) and a collection of studies: he searched ERIC (thesaurus categories - ENG for Academic Purposes and Second Language Instruction) and said that there were only 41 relevant studies identified. He listed learned skills as grammar rules, language functions, reading skills, writing skills and critical thinking skills. While these skills develop, performance changes in accuracy, quality, speed and approach. Moreover, memory demands not only recall and recognition but both at the same time as well. He also added that transfer improved accuracy and fluency.  James pointed out that it is students’ responsibility to transfer however transfer cannot be achieved automatically; therefore, he emphasized instructor’s crucial role and responsibility to encourage students to achieve transfer in EAP and ESP context.

Nick Ellis of Michigan University did a Corpus Linguistic session claiming that learning L1, 2, 3, 4 is learning a set of mapping. Language knowledge and processing is sensitive to frequency of usage. Learning is usage-based therefore each episode of processing affects the learner’s system. The language acquisition environment is the key to be analyzed to understand what impedes meaning. He discussed the cognitive determinants of learning and construction in acquisition, sharing the research he conducted.

When the Usage-based Approach to Second Language Teaching is concerned, Nguyen & Verspoor, who stressed the importance of initial conditions as learning is a dynamic process. Not only the input, but also the circumstances interact such as sounds, intonation, lexicon, grammar for a continuum, grammar sub serves meaning but no primacy for syntax (Eskilden, Wagner, Ortega 2013 AAL symposium). Exposure should occur in meaningful context created in L2 language classrooms. Input through media enables learners to get real life, natural conversations. They suggested that 2-3 minute media chunks be cut up, so that students get more excited about the rest and they are guided to see the rest outside the class hours. Schmitt (2010) was quoted as saying that 8-10 times hearing or seeing enables acquisition- a valuable tool for language retention.

Paul K. Matsuda of Arizona State University examined the conceptions of voice: An analysis of writing teachers’ constructs and processes. He shared data that he gathered from 23 writing teachers, identifying conflicts and inconsistencies. He concluded his analysis with the following summary: a) Teachers define voice with some difficulties, b) Dealing with voice reveals some difficulties,

c) Individuality and social constructivist network of identity should be put together. If you would like to know more about his interdisciplinary research, come and join us at the Freshman English Conference on 17-19 September 2014.