A Review by Jacqueline Einer

The conference started with the three deans of the education faculties of MEF University, Bosporus University and Middle East Technical University thanking different people for helping with the conference, including Ataturk.

The conference continued with the following panel: Gelecek Özel 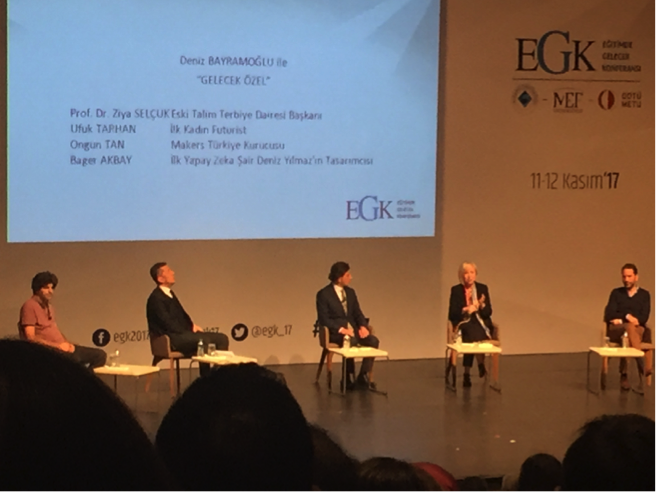 Ufuk Tarhan (Futurist) said that we need to be visionary and doers at the same time. It’s not a matter of handing the problems of today over to the young to solve. She also mentioned that we need to chose information and use it correctly.

Ongun Tan (Founder of Makers Turkiye) said that many education systems throughout the world are in the same situation as Turkey. He said that we need to be constructively critical and ready to move from having an idea to implementing it. He gave the example of England attempting to implement coding in primary schools and this first attempt not having been very successful. He thought that the important point was to have made the attempt and then to learn from it. Ongun Taner talked about how he started being a Maker as a hobby and then decided to take the maker idea to children in Anatolia. He talked about how a 16 year old worked together with an overseas firm without any training, workers, etc and was able to successfully complete his project. Ongun Taner felt this highlights the importance of learning by doing, by teaching each other or by learning by doing with the help of a mentor. He thinks we should think about how we can put this into education.

Bager Akbay (Creator of the first AI poet, Deniz Yılmaz) said that good examples are needed and that then we need to analyse them honestly without hiding the negatives. He also stressed the importance of allowing students to make mistakes and said that with the current education system when students come to university it takes six months to help them relearn the skill of making mistakes. He feels that education should focus first on doing or experiencing something and then look at the theory underlying the experience.

Ziya Selçuk (Maya Schools) said that we shouldn’t fall into the trap of the “shiny objects syndrome”, of chasing after something and before using it and evaluating it properly abandoning something because we have been attracted by another shiny object. He reminded us that our approach and methodology needs to be based on our educational theory and philosophy, in fact, on our general philosophy of life. He also said that we have to believe that is possible for good ideas to come out of Turkey, that we don’t have to import these. He said that if we don’t believe this we will just change the type of inferiority complex our children experience, rather than removing it. 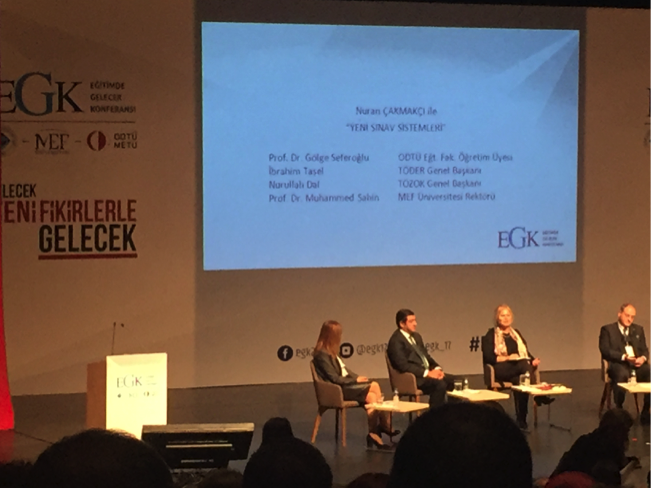 Muhammed Şahin (MEF Rector) says that where we are in terms of the rest of the world is important. However, the exam system is changed without consultation with educators and teachers, without any regard for the education model being applied. Therefore, it is not surprising that we don’t see an improvement.

Ibrahim Tasel (head of TÖDER, All Private Schools Association) says that life itself is an exam. In order to develop we need feedback and exams are the simplest form of feedback. All countries have exams: some of them are more appropriate for the age group that they are applied to or spread over wider periods which can make the exam process seem easier. He feels that this system is appropriate for the context of Turkey but of course it could be improved, for example an essay component could be added.

Gölge Seferoğlu (faculty member of the Education Faculty, METU) says that is disrespectful to all stakeholders to make a change overnight. As we all know, first analysis of the current system needs to happen, possible changes need to be suggested, all the ideas of the stakeholders need to be gathered, a pilot needs to be run and then changes can be implemented. She also talked about the need to design exams that could measure application of knowledge, as well as the need to be sincere and conscientious and worry about the effect of the changes that are introduced on students.

Nurullah Dal (head of Turkey Private Schools Association) says that schools are preparing students for exams. Exams have a serious washback on education. However, education is about change. Change happens in our lives very quickly. Therefore, it is not that surprising that these changes are brought in quickly. However, this doesn’t mean that we can’t improve the way exams are being evaluated and changed. Before changing things, we need to check whether the exam is doing what we want it to, fairly and accurately. Parents also need to be educated not to put so much pressure on their children as success in life does not have a 100% correlation with success in exams.

Şafak Boy (Senior Manager, Randstad Turkey) said people choose what they see successful people around them doing, instead of doing what they would be best for them. They look to people older than them for advice. Jobs now require people to have a variety of skills and knowledge. Universities need to work closer with employers. Parents need to control their worry about the future and not interfere with their children’s choices. A diploma has a lifespan of five years. Teachers can forget themselves when they are concentrating on their students. They too have need to keep learning new things.

Cavit Yantaç (Assistant General Manager, Microsoft Turkey) said Henry Ford and the production line led to cars and petrol becoming very important in our lives and to the biggest companies in the world being petroleum companies who could even affect governments. What it meant in terms of work was that work was specialized and we thought of things being led by one person and there were people under that supervisor who followed what he or she said. This continued until around 2000 when companies like Facebook, Apple and Google became the biggest in the world. This changed employment needs. Now we need employees who can use data well, who might need to have 2, 3, 4 professions in the future and who might retire around 2070. So we can’t just teach students one skill; we can’t think of things in the workplace as being led by one person. Work or life will require people to evaluate data so students today need to learn maths and statistics; they need to have multidisciplinary knowledge or at least be able to work with people from different disciplines. They need to be able to work in teams with people who have different skills; they need to have sound ethical values; and therefore they need teachers who have these values and skills. He also said that the best place for learning is in games. It is better if it’s done physically and face to face and if requires the use of imagination. He feels that children have an amazing amount of energy, they are full of questions, and they can’t stop themselves from interrupting but university students are frozen and anxious. He believes that students also need to play games to help them regain their enthusiasm. He also mentioned the value of problem based learning and project based learning.

Murat Akpınar (faculty member from JAMK University of Applied Sciences) talked about how at the university he works at in Finland learning is designed by the students themselves with the assessment being both performance-based and self-assessment based through the use of portfolios. He said that in traditional instruction content is what counts and the differences between students are not taken account. The focus is on transmitting knowledge to students and assessment is exam based. However, in comptence-based curriculums such as those used in JAMK University there is a student-centric approach with an emphasis on individual tutoring. He feels that this better meets the needs of students and the community as work life is changing and prosperity of the individual and the community is now, more than ever before, dependent on entrepreneurship. He feels that such an approach to learning meets current and future needs far more successfully than traditional methods.

Cem Arıtuluk (Vizyon College, CEO) said that technology in the classroom is not for interest but to make learning faster and easier. It is so that less time is spent on teaching and more time on applying knowledge and doing. Technology should make lesson preparation faster and easier, even taking into account that we are now focusing on more individualized learning. Technology is not an accessory and it isn’t a magic wand: it won’t solve all our problems in education. It is a support: it needs to be integrated into learning and not added alongside.

Ali Türker (Science & Technology writer and consultant) talked about how a number of projects are working on getting Artificial Intelligences to pass high school and university entrance exams. These projects have almost reached their goals and he believes this shows that we should no longer count knowledge transmission as a demonstration of intelligence.

Yalım Eriştiren (INTEL Turkey, General Manager) says we are at a turning point. In the most recent PISA scores Estonia was third. SKYPE is from Estonia. They are a small country of 3 million people and they have been working on improving their education system and especially literacy for 100 years. Finland says that they teach students to learn. Price Waterhouse Coopers sees the future as blue, green and orange. Blue are big companies, green is for control mechanisms and orange means entrepreneurship. These three are necessary for the future but entrepreneurship is especially important because it means small but continuous renewal. There is a changing focus in learning. The teacher is more in the background as a coach and he went on to talk about how popular Maker competitions are in the US.

Anıl Çekiç (Microsoft Turkey, Director) says that everyone is learning: it is no longer that the teacher knows best. It is no longer game over (i.e. you’ve failed) but student / player can press the button and keep learning.

So there was a lot of food for thought at this conference. Big ideas, but the question is of course, how to put them into practice. I ended the conference by attending a session on mindfulness and I chose not to take notes but to just experience the session.  I enjoyed it and can definitely recommend the presenter Zümra Atalay. 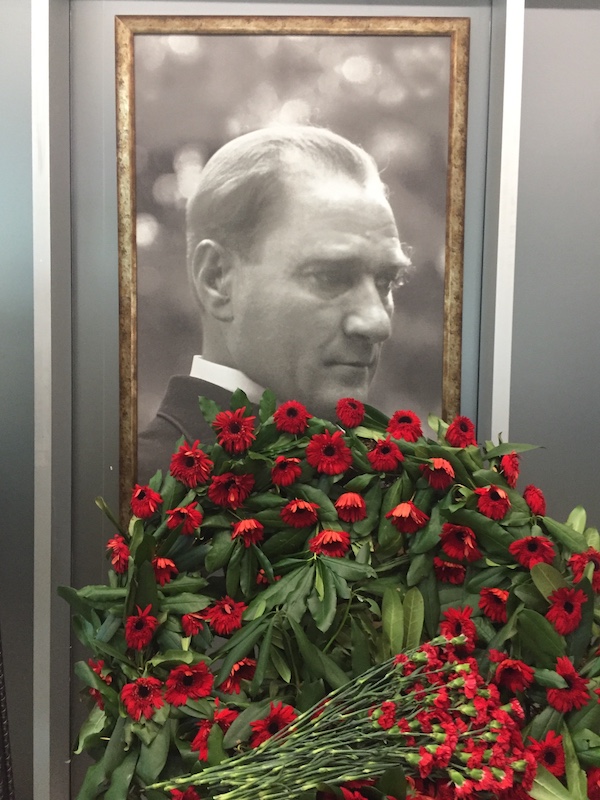