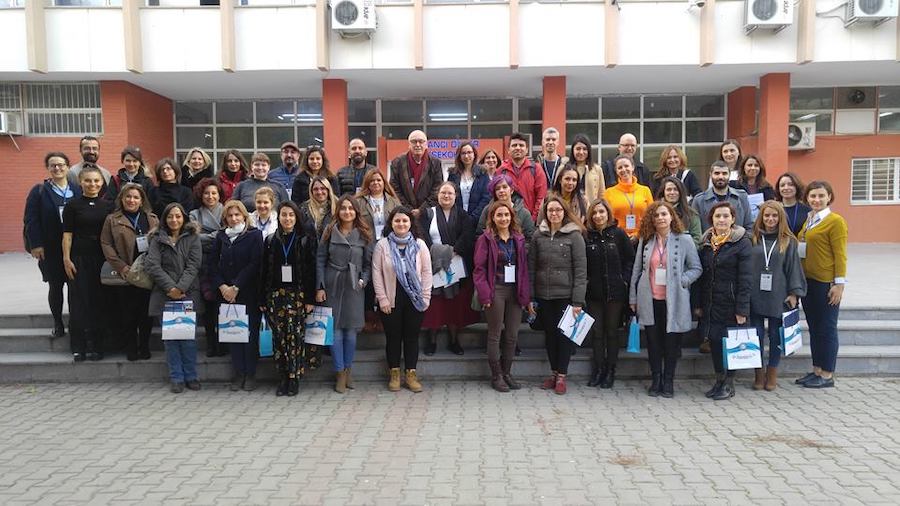 The FOCI – XVIII was held on 6th and 7th December, 2018 at the hosting institute, Ege University, with the main theme of “Assessment from a Curricular Developer’s Perspective: Who? What? When? And Why?”

It was an amazing experience on my end as it was a really good opportunity for me to see what the other institutes were doing in terms of curriculum and assessment, as well as the issues they were facing while carrying out their practices. There was a mix of public and private universities and we became to realise that only three universities have a joint curriculum and assessment team, one of which we, as Sabancı University School of Languages are among.

With the guidance of a facilitator from the hosting institute, each group was given some points to consider, however, were not limited to these and could put forward any ideas that were relevant to their main theme. There were also three articles that were suggested as pre-event readings and we were asked to refer to these in our group discussions as well. After a brief introduction, we shared our ideas and made suggestions relevant to the main theme. By the end of the day, we had prepared a 10-minute presentation.

Each focus group also had to come up with 5 questions for each of the other two groups. It was apparently the first time the FOCI committee decided to do something like this to generate more discussions, which, I believe, achieved its purpose quite successfully.

On the second day, we were given another hour in the morning to finalise and rehearse our presentation in our groups. One of our group members volunteered to do the presentation. Then the whole group came together, and by midday, all three groups did their presentations and each of them answered the questions that had been generated by the other two groups, and this was followed up by whole group discussions.

In the afternoon, the participants from two universities, one that has separate curriculum and assessment teams and one that has a joint one. They presented some information about their institutes and how they carry out curriculum and assessment practices. The main purpose of these presentations - which was apparently again something tried out for the first time at FOCI -  was to give the participants a better understanding of what the roles entail specifically and how these practices are carried out in different ways. The FOCI committee received positive feedback for this as well.

The last stage of FOCI was about individual reflections. We were asked about “three key ideas that we would wish to take away from the event” -  an issue / concept which arose during the event that we felt was important or an idea we’d like to take back to our institutions or an area we’d like to explore in further detail in our own context. We actually discussed these in groups of 3-4 and shared our ideas with the whole group. In general, the outcomes showed quite a lot of similarities among the group.

The closure of FOCI came with announcing the theme and hosting university for the following FOCI event.

•There was quite a lot of emphasis on whether having a joint curriculum and assessment team would be more effective than having separate teams. There was great interest in this as quite a number of institutes were experiencing issues with the communication and collaboration between separate teams and were looking for effective solutions. My overall impression is that, most of the participants thought that a joint team could be more effective, though, some stated that they would like to explore this a little further, and some seemed a bit more determined and were already considering taking this to their institutes and suggesting the changes as soon as possible.

▫At Sabancı University School of Languages, a joint team is already in place and working well.

•An important point also raised was about the relationship between teacher autonomy and learner autonomy. In some institutes, the materials to meet the objectives are solely prepared by curriculum team members and because there are concerns related to the possibility of giving away assessment related material, there is no or hardly any room for teacher flexibility. The general opinion of the group was “how can we expect learners to be autonomous if there is no room for teacher autonomy?” It was mostly agreed that, as long as the objectives in the curriculum are met, teacher flexibility, hence autonomy, should be encouraged as much as possible. Subsequently, this will encourage learner autonomy.

▫At the School of Languages, we already allow room for teachers to be more flexible and encourage them to be more autonomous. We also emphasise the importance of learner autonomy through our practices.

•Another concern raised by some participants was about having too many or frequent assessments in their institutes that was taking up quality class time which could be spent on learning instead. It was mostly agreed that the quality of assessments should be priority rather than the quantity, and that there should be a balance between curriculum and assessments as well as formative and summative assessments, and learning should not be too test-driven.

▫Again, at our school, I believe we have a reasonable number of assessments throughout a 16-week course and our assessments are fairly balanced.

*A final point I’d like to state is that, for any kind of practice to be effective, it all depends on the educational policies within the institutes. In other words, it all comes down to how much change and innovation is encouraged and supported by the Administration, or more specifically, by the Director. At the School of Languages we are very fortunate in this sense.