GSIC at TEVITÖL on LGBTQIA+ Terminology

GSIC (*) at TEVITÖL on LGBTQIA+ Terminology 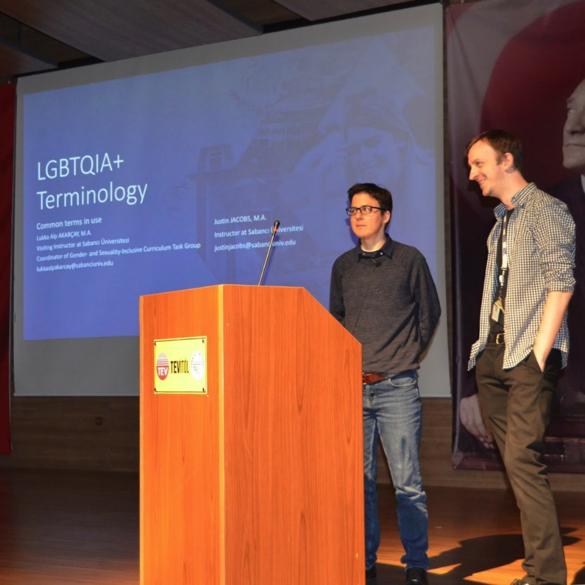 “Why do pronouns or gender and sexuality issues matter?”

Learning is about disruption and opening up to further learning, not closure and satisfaction. -Kevin Kumashiro

One student in the middle row raised her hand and asked, “I don’t understand why these issues, like the pronouns people use, are so important and that we need to take these seriously. I mean when there are so many problems in the world that need addressing, why do we have to think of gender and sexuality issues as important?” Justin and I looked at each other briefly after the student posed this question. It was disheartening to hear someone exerting almost a resentful opinion. The voice was indignant, asserting a  stance against LGBTQIA+ issues being everyone’s issues. “We are certainly not saying LGBTQIA+ issues are more important than other issues. There are many problems in the world that indeed we should be aware of and address. What we are saying is that LGBTQIA+ people have historically been a minority group in the world who have systematically been discriminated against and whose voices have repeatedly been silenced; that LGBTQIA+ people constantly have to fight for their basic human rights, and in some places they have been criminalized for being who they are. There are so many problems in the world, we are not saying this is the most important problem, what we are saying is that discrimination against LGBTQIA+ people is real” Justin replied. After our talk, the student approached Justin and apologized for sounding aggressive and stated that they themself had questioned their sexual orientation and requested a certificate and wanted to stand in solidarity as an ally.

There were many inquisitive questions that TEVITÖL high school students asked us, questions that ranged from why there is a need for the word queer since the acronym LGBTQIA+ stands to mean the same, to what it is like to transition in Turkey legally. Our audience was engaged, very attentive and eager to share their thoughts and perspectives with us when we posed them questions. We were thrilled to openly discuss gender and sexuality categories with them.

Considering high school age an important time when many youth might begin to explore or question their own sexual and gender identities, but are rarely afforded the affirming resources or opportunities to do so, being invited to give a talk on LGBTQIA+ terminology was indeed a great opportunity to help provide an avenue to discuss gender and sexuality topics with the students. Many educational systems and institutions exercise and augment heteronormative structures and reinforce limiting beliefs of categorizing and seeing the world we live in. Societal and cultural heteronormativity expands into curricula in restrictive analyses and definitions of the concepts of gender and sexuality and often deprives youth from even a fair exposure to non-normative information on the fundamentals of human existence, on topics relating to understanding one’s relationship to the self and to others while exploring gender and sexuality as a spectrum rather than a binary. For those students who may identify as LGBTQIA+, the lack of legitimate representation can be deeply damaging and may easily result in an all-consuming internal struggle not only to sustain and affirm their identities, but also to cope with the feeling of exclusion and injustice as subjects vulnerable to discrimination or oppression.

Yağmur, a TEVITÖL student, invited us to give the talk at her school. Yağmur got in touch with us through Sibel Şimşek, an SL instructor. Yağmur is Sibel’s daughter and she had heard about the workshop we gave at SL on LGBTQIA+ common terms and was interested to have us give a similar talk on the same topic at her school. TEVITÖL is a boarding school for gifted and talented students, located in a beautiful lush green landscape by the sea in Gebze, Kocaeli. Once we arrived on campus, Yağmur, a very welcoming student, took us on a tour, sharing with us bits and pieces of history and stories relating to the people and various buildings along with the current issues and ensuing changes at the school. As we arrived at the building the auditorium was located in, she showed us an art exhibition in the gallery where some of her very creative artwork was on display.

We structured our talk, LGBTQIA+ Terminology, Common Terms in Use, in two parts: Sex vs. gender and sexuality. Closing with the importance of allyship, we invited students to make a pledge. This involved giving away postcard-sized cards that contained the words “I’m an Ally.”  The idea behind this was that students could take away something physical to remind themselves of what it means to be LGBTQIA+ allies. Students could sign their names on these and pledge to be allies. The high level of interest in these pledges showed us that the reception to our talk was overwhelmingly positive. We wished we had prepared more pledges to give away as we rapidly ran out of them and did not have enough to give to all those who wanted one.

Our talk was centered mainly around definitions on some common LGBTQIA+ terms. Opening the talk with the category of gender identity, I shared with the audience my gender identity, communicating the fact that I am a trans person who identifies as male and followed this with definitions for trans man and woman and continued with an explanation of the process of transitioning and the importance of pronouns for trans people. Afterwards, I talked about the difference between sex and gender, gender identity and gender expression, and finally about concepts such as cisgender (not transgender), before speaking about transphobia and LGBTQIA+ bullying. In the second half, Justin shared his own coming out story and what this experience was like for him. He then talked about the difference between sexuality and sexual orientation and gave a variety of examples of sexual orientations. He explained what the letter Q in LGBTQIA+ stands for before talking about heteronormativity and how it may manifest. He then shared some ways in which oppression may function and the semantics of microagression, using an example to demonstrate how some common phrases may be insulting on an unintentional or subtle level. We then invited students to ask questions.

We asked students to share their thoughts on how they found the talk by filling out an online feedback form. It is worth noting what some students said in response to the question: In what ways has this workshop helped you in your understanding of inclusivity or diversity?

Hearing about LGBTQIA+ from LGBTQIA+ people is quite an opportunity to get rid of all the question marks about the LGBTQIA+ community; I learned about the gender spectrum and LGBTQIA+ terminology, I learned how to be an ally!; I noticed that I had known nothing about gender; I figured out that I am not the only one who gets in trouble with his/her/zer pronouns; The emotional aspects regarding the lives of LGBTQIA+ people; It made me understand the terminology which I had no idea about before.

It was wonderful to be invited to such a unique high school to talk about LGBTQIA+ terms with students and equally wonderful to have an audience who was attentive and asked inquisitive and insightful questions. We found the experience to be rewarding and enjoyed our time with the exceptional TEVITÖL faculty and students.

Many thanks to Yağmur Şimşek for recognizing the importance of LGBTQIA+ issues and striving to do proactive work on educating her peers on LGBTQIA+ people and issues as well as to the school’s counselor Betül Büyük and TEVITÖL for acknowledging the significance of creating a supportive learning environment that is accepting of and safe for queer students by providing a platform to discuss LGBTQIA+ topics and inviting us to give the talk.