Making the Virtual Platform an Integral Part of Your Conference

Making the Virtual Platform an Integral Part of Your Conference
Sharon Turner, Former Instructor at the School of Langauges, Sabancı University, Istanbul, Turkey 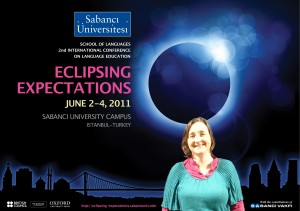 While planning a language conference you might be tempted to only see the virtual platform as the advertising arm of the operation, reaching possible delegates, generating excitement about the conference and posting updates or changes to the programme.  While many platforms will take this approach there are many other possibilities of using your virtual platform to create an educational dialogue not only for those within the conference but to help integrate face to face and virtual participants as part of a wider educational experience around your conference theme.

This is exactly what we had in mind with our own virtual platform of Eclipsing X during our 2011 Sabanci University School of Languages 2nd International Conference on Language Education.  We were inspired by the theme of ‘Eclipsing Expectations’.  How could we change the way that we had integrated a virtual platform before and make it truly meaningful and integrated into the conference at the pre, during and post stage and push ourselves beyond our own boundaries.  Here are a few of our virtual experiences.

We wanted our platform to have a valuable contribution to the educational field.  We did this in three ways:

a-We wanted educational discussion around the themes of the conference.  This was evident in Eclipse Chat.  Through the eclipse theme we had the idea of different voices being heard during the conference; those of students, teachers and other stakeholders.  Our chats on Twitter and Facebook provided an open forum for people to explore these different voices.  We had Ask the Director on Twitter, Ask the Students and even discussions for all in our Facebook Group,.

Out of the 5-6 tweets we allowed ourselves on a daily basis we generally only allocated one to advertise the event.  We saved one to retweet a great idea from another educator online, one to announce our EclipsingX Daily (a conglomeration of other people’s educational ideas that had been shared on Twitter) using paper.li.com, and the final one for a piece of software or website that could be incorporated into a classroom.

c-Commiting ourselves to sharing the knowledge to facilitate educational exchange

We taught ourselves how to use Twitter as well as to build a blog from scratch.  We realized how much potential these tools had to reach other educators and we learnt many amazing ideas from our colleagues in the virtual world.  From what we had experienced we invested our time in offering training to our fellow teachers but also to students as part of our build up to the conference.  One was a joint training in collaboration with three high schools in Istanbul where we taught twitter to learners and the other involved mentoring Sabanci University students to set up their own individual global chat forum for students.

Experience 2: Integrating the physical conference and the virtual platform

We opened up Howard Gardner’s talk at the conference to the Internet community.  The virtual platform would be able to ask one of the questions to him after the talk via the virtual team.  This was all quite surreal as he appeared virtually at the conference by live stream to the physical audience.  The virtual followers of the conference were given the challenge of coming up with a meaningful question on his talk.  The conference committee then narrowed the questions to three.  The three questions were then posted on Facebook/Twitpoll and people could vote for the best question.  Finally about an hour before he spoke the winner was announced.  The question was asked from the conference floor and one of the summary writers took notes on his answers.  This was then posted on our conference blog as a response to the winner.  Behind the scenes the virtual platform also nearly saved the day for that talk.  The questions from delegates were drying up on the floor and there was still time left.  We were asked to have the other questions ready just in case the floor questions ran out.

Experience 3: Blending he virtual presence with a physical place

Weaving the virtual platform as an integral part of your conference might seem daunting but if you commit to giving it a meaningful role it will enrich your event and lead you to doors and possibilities that you may never have imagined.