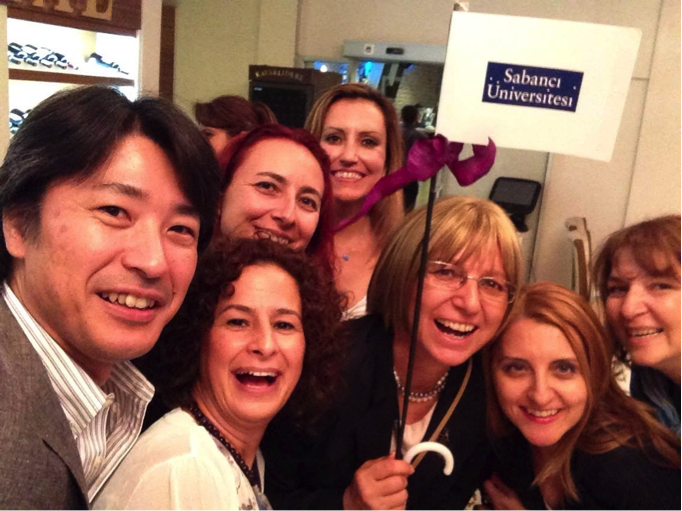 REFRESH: CHANGING ROLE OF FRESHMAN ENGLISH
Review by Meral Güçeri
Sabancı University International Freshman English Conference was held at Minerva Palace, Sabancı University Karaköy Premises in İstanbul on 17-19 September 2014. The Pre-Conference Event started with the opening speech by the Freshman English Coordinator Dr Zeynep İskenderoğlu Önel. Her speech highlighted the aim of this gathering and our expectations from the participants. Then, the coordinators and the teachers of Freshman English Programs were invited to perform various tasks to reflect their institutional practices. The Pre-Conference Event provided a forum to get to know and learn from each other.
The Conference started at 9.30 am on Thursday, 18 September gathering together delegates from Algeria, Azerbaijan, Finland , France,  Iran, Japan, Northern Cyprus,  Qatar, Saudi Arabia, Turkey, UAE, the UK, and the USA to share their research and teaching ideas. In my opening remarks, I highlighted the crucial role of information in bridging various disciplines and the systematic investigation of learning and teaching to promote societal development. This powerful role of information is enabled as it is a tool for optimizing critical thinking skills in the inter-disciplinary context. Following my speech, Vice President Prof. Dr. Sondan Durukanoğlu Feyiz gave information about Sabancı University.
Prof. Dr Paul Kei Matsuda of Arizona State University was the first plenary speaker and he explained the concept of “thinking ” by providing thought provoking examples. Some of Paul’s reflections may be summarized as follows:
“...thinking is the ability to use reasoning to construct and evaluate arguments.  Basic thinking involves recognizing, describing, explaining, classifying and making sense. Advanced thinking which is considered to be critical thinking however, requires questioning, problem solving, evaluating, arguing and generating knowledge. Meta-thinking consists of question posing, problematizing, deconstructing, transforming and making a difference…”.

In addition, Paul stressed that critical thinking is not necessarily negative thinking even though the title may sound so.

The second plenary speaker Prof. Dr. Derin  Atay put forward two literatures claiming that they “...shaped much of the writing on critical thinking in the educational foundations over the past [...] decades:  Dewey’s Progressive Education and Pablo Freire’s Critical Pedagogy.  Each of these two literatures invokes the term ‘critical’ as a valued educational goal, urging teachers to help students become more skeptical toward commonly accepted facts”. Having shared research findings, Derin  ended her talk on the following note:
“...These studies along with many others indicate that teaching critical thinking involves more than asking people to ‘look critically’ at something, as if criticism is a mechanical task. They should be involved in the critical thinking tasks to benefit from the process. A natural consequence of not thinking critically is a loss of personal freedom and this can only be avoided if this skill is fostered from early education on.”
Our third plenary speaker Prof. Dr. Mark James defined what learning transfer is and discussed why it is important in EAP education, what EAP educators can do to help promote learning transfer. When Mark explained what kind of learning transfer occurs in EAP education, he refered to research and said:
“...Fortunately, research has explored and shed light on transfer in EAP contexts.  First, research has suggested that, generally speaking, EAP learning can transfer.  A number of studies have produced evidence that students transfer learning from EAP courses to work in other courses, and this research has been done in a range of EAP contexts, including colleges and universities in Australia (Dooey, 2010; Terraschke & Wahid, 2011), Bahrain (Hayes, Holden-Rachiotis, Kavanagh, & Otoom, 2011), Canada (Currie, 1999; James, 2006a), New Zealand (Basturkmen & Lewis, 2002), and the United States (James, 2010; Kasper, 1997; Leki, 1995; Leki & Carson, 1994; Moulton & Holmes, 2000; Snow & Brinton, 1988; Song, 2006; Spack, 1997)...”

Concurrent speakers also emphasised the role of critical inquiry and how to build skills in developing critical thinking in interdisciplinary context. We explored how we can encourage students to explore knowledge production and their role in the process.  We aimed to highlight the terms of interdisciplinary knowledge within the fields of learning and instruction. I am happy to announce that we are compiling all these studies in an electronic book published in 2015 with an ISBN number.  There were research papers from the School of Languages .İlkem Kayıcan, Shari Young and I shared our recent research studies and findings.
The Conference provided motivated researchers with a forum where they not only shared their research findings in knowledge building but also connected with one another, both formally and informally. We wish these networks will last far beyond the time of our conference.
Sabancı University Freshman English Conference, Refresh: The Changing Role of Freshman English Conference 2014 ended with the School of Languages Director Jacqueline Eiener’s closing remarks. Director Einer  summarised the highlights of the sessions and stressed the importance of ‘thinking skills’ and interdisciplinary knowledge within the fields of learning and instruction.
We believe that the city of İstanbul and the Conference offered the optimal circumstances for a fruitful scholarly exchange in a very special venue, the Minerva Palace.  Minerva was the Roman goddess whom the Romans from the 2nd century BC onwards equated with the Greek goddess Athena. She was the virgin goddess of poetry, medicine, wisdom, commerce, weaving, crafts and magic.
We wanted the Conference to reflect a hint of each of these virtues: Academic writing is a craft which weaves the fabric of scientific knowledge with literary skill. It is the medicine of the scientist who sometimes struggles to communicate his or her genius! Oral presentations and seminars equip our Freshmen with the tools for them to commercialize their scientific knowledge gained in the later years of their higher education. Although this combination may sound like some sort of magic, instructors strive to bring out the best in the students of Freshman English.
Minerva’s wisdom, we believe, guided our discussions in this conference while our participants enjoyed the sessions and the magic city of Istanbul that combines two continents with a rich heritage dating back thousands of years with a contemporary flair.