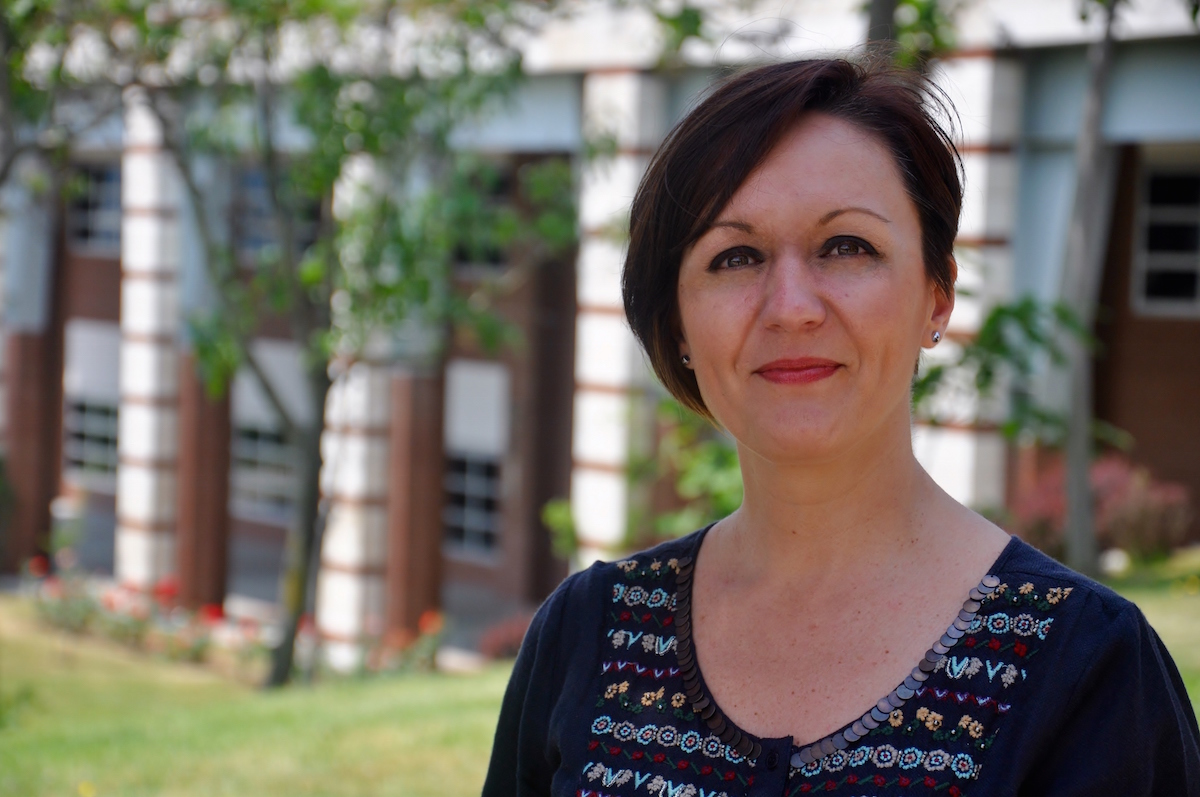 The 36th TESOL Greece International Convention “Teaching to New Heights” was held on 21st & 22nd March, 2015.  The event started with a “pre-conference event for out of town presenters” sponsored by Express Publishing at the Acropolis Museum at 19:00 on Friday, 20th May. The guided tour in the museum was a great opportunity not only to learn a lot of important information about Greek history and Acropolis, but also to meet the presenters and the conference organizers before the conference. Then, at around 20:30, another sponsored mini-tour of the town of Athens took the presenters to the last part of the pre-conference event, which was a small feast - the Greek way - at “MEAT-MEAT-MEAT THE GRILL”. The two day event was very well organized, starting at 10:00 in the morning and finishing at 20:30. Plenary talks, professional, poster & commercial presentations and panels seemed to be meticulously planned, informative and to-the-point.

The first day started with the plenary by Agnes Mariakaki, who is a psychologist, NLP Trainer and the manager of “MindSearch”. She started her talk titled “When smart kids find it hard to learn in class, might educational trauma be a cause?” By giving the example of her traumatic experience while learning British letters as a child in the first grade, she emphasized that the joy of learning dies out once the kids start to measure themselves against the demands of their parents. She also made a very valid point about how technology is used to keep them silent by their parents and the disappointment kids are faced with when they meet pen and pencil to keep them silent at school by the teachers. They are asked to look at the whiteboard, which is static instead of the colourful screen of the laptops. The “micro movement” they have to do for the kid is a “big movement” when asked to look at the board and copy the things into their notebooks, which is a new skill they need to adapt. She also emphasized how negative experiences at home or within the learning environment affect the child’s capacity to learn. The reason she mentioned for this is that traumatic experiences cause the brain to change. Therefore, its capacity to focus is also affected. She also explained how thalamus (the radar, which collects info from all senses), amygdale (right hemisphere worker, which collects every experience and stores in the hard disk of the brain) and hippocampus (left hemisphere, where there is a “thinking little boy” collecting all the content and meaning of every emotional thing) work and how they are affected when there is a threat or trauma. When a sense of threat is detected from the “demands of the parents, teachers or friends” the hippocampus “shuts down” and a smart kid cannot get, remember, or do what is expected from them. She used the metaphor of a bus with flat tires to illustrate the child’s mind when the hippocampus does not work. Unfortunately, this trauma is coded to the next generations and failure creates more failure. She suggested three steps to help and support the gifted but underperforming children. 1) Ignite: Connect them with joy and with your voice. Touch, smile, tell stories and hug them. 2) Appreciate: Open their hearts, teach acceptance by self and others, teach them self-talk and become a colour of a child. 3) Teach failure: Teach them that failure is a synonym for bravery and effort.

The second plenary on the same day was by Stephen Krashen, who is best known for developing the first comprehensible input theory of second language acquisition, introducing the concept of sheltered subject matter teaching, and as the co-inventor of the Natural Approach to foreign language teaching. In his talk, he analysed his famous theory of "Compelling Comprehensible Input" in a comprehensive and entertaining way. He referred to the Flow Theory of Csikszentmihalyi, while explaining what “compelling” means. According to Dr. Krashen, input needs to be not just interesting but compelling for optimal language acquisition. If the input is interesting, the learner forgets that it is in another language and gets into a state of “flow”, which proves to be a compelling input. He recommended stories and/ or comics, movies as resources. Through listening to or reading compelling stories, the learner gets so involved that language acquisition comes as an unexpected result even when this student is not interested in pursuing it. The TPRS method was also mentioned, according to which learners are the characters in stories they co-create. The age to start reading does not matter, what is important is to get absorbed in it, according to Dr. Krashen. For him the same rule applies to developing academic language. University students also need to read texts that they choose, while developing their academic language. His final suggestion was “to do things the way the brain works”.

On the second day, Luke Meddings, who is an award-winning ELT author and teacher trainer, tried to draw parallels between urgent challenges in education and society in the third plenary titled “Assembly: Education, Community and Service”. He started his talk by questioning what it means to be in a community in a class. He referred to the term “glass ceiling”, which was coined in 1987 with the first advances of feminism were seen, as an invisible barrier that stood between jobs and women. He argued that passive education models will not enable teachers to meet the challenges. Therefore, an active and collaborative model, without a “glass ceiling”, in which students and teachers both have a voice needs to be adopted. Being flexible about timing, moving from top down to bottom-up approach, reflecting on one’s teaching, and using tools like interactive white boards were some of his suggestions. He also argued that education or learning English should not be aiming at careers or qualifications but it should be a shared enterprise, where you listen to the students’ voices. He also added that schools should be more about understanding or thinking critically rather than their financial concerns. They should not squeeze the space between the students and the teachers. He also mentioned that he was against the business words that are being used in education such as “efficacy”. His final remarks were about his hope for schools to be places where we start to prepare our society for children.

The final plenary given by Burcu Akyol, who is the School Principal at ISTEK Schools in Istanbul, was a kind of self reflection. She shared the 14 questions she has asked herself each year throughout her teaching career and the responses she gave to herself, which made a great contribution to her self-development.

Apart from the amazing plenary talks, there were many concurrent sessions which inspired me a lot. Among them, Zoi and Evangelos gave a session on “Online storytelling”. The list of websites they suggested included free ebooks for students. In most of these sites, there is an option for a class login (i.e. same codes for all the students in a class) where students can listen to the text and choose a book according to their age. The websites contained in the presentation were:

In Mark Osborne’s session on Ipads, the audience found the opportunity to discuss the best practices and useful apps that can bu used on IPads. Fotobable, Comicstrips, Evernote, Edmodo, were some of them mentioned during the session.

“All the World’s a Stage: Celebrating 451 years of Shakespeare” by David Gibson and Luke Prodromou and a dance performance by the NO project Dance Crews were the final performances of the Convention. A wine and cheese cocktail was a good opportunity to say goodbye to all the participants and conference organisers at the end of the second day.

For more information about the convention, you can visit the links below:

All speakers in one video: https://www.youtube.com/watch?v=6BgxmPNm-0U 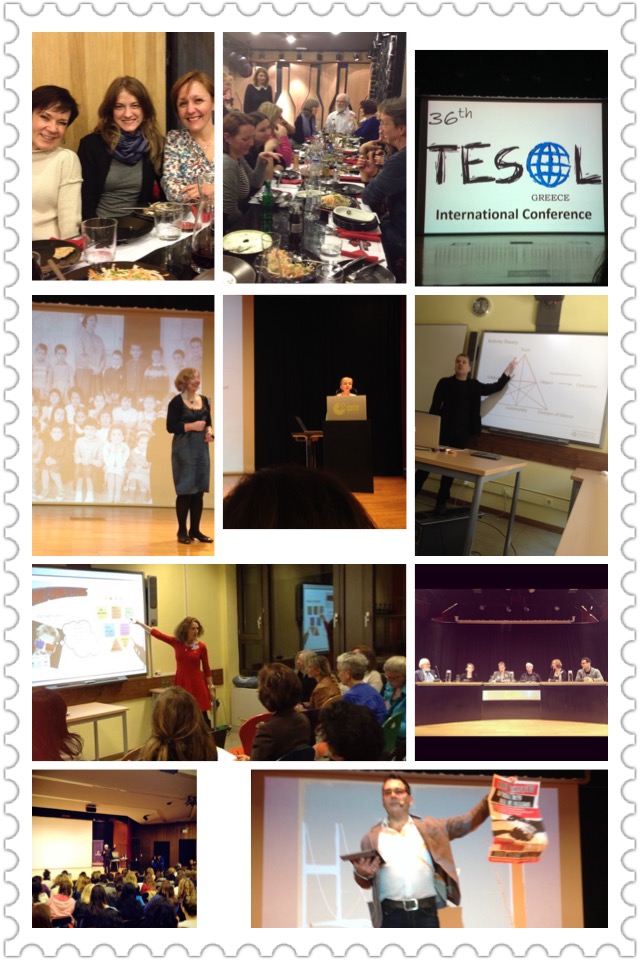