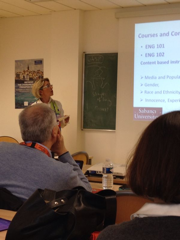 WRAB (Writing Research Across Borders) III 2014 was held in Paris with the participation of hundreds of delegates from 52 countries. Presentations were in both English and French. Let me tune in and try my best to write in both languages! Let’s see how far I can go!

The next conference is planned for February 2017 in Bogotà: Colombia and Zeynep İskenderoğlu Önel and I expressed our interest in organizing the 2020 conference at Sabancı University.

Numerous writing research studies were presented and I am delighted to share a selection of them while displaying the posters as well. I have no doubt that Zeynep İskenderoğlu Önel will also reflect the sessions that she conducted and also the ones that she attended.

In WRAB III 2014, I discussed my paper among a team of 8 scholars chaired by Luisa Alvares Pereira from the University of Aveiro in Portugal under the following theme: Effects of digital technology on types of written communication, contexts and communities:Effet de technologies informatiques sur les formes d’écrits, lês contextes de communication et les communautê:

In the presentation entitled “Writing text messages: an experimental appraisal of pragmatic factors” Carel van WIJK from Tilburg University & Hanny DEN OUDEN from Utrecht University, Netherlands shared their research on the students’ SMS messages. They discussed the impact of such communication on academic writing. 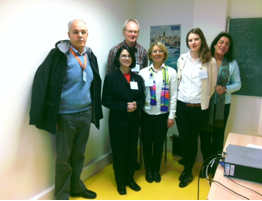 My session “The relationship between the use of media, literature and writing performance in academic writing” highlighted some crucial issues referring to a recent research study which investigates the relationships between L2 writers’ use of media, literature, academic electronic sources and their writing performances. As Hyland (2004) discusses the discourses of academia claims that these discourses are diverse and this diversity has implications for writers in their interactions. Different academic contexts place demands on communicative behaviour. Disciplines are constantly re-created through ongoing social discursive practices of individuals as they negotiate and reconfirm their membership in academic communities. While teaching and learning academic writing, awareness is raised on the cognitive, social and linguistic demands of specific disciplines. Hence, academic literacies are promoted developing new kind of literacy to learning so that the learners are engaged with the values of institutional goals and practices. My WRAB III 2014 input embraced all these issues in various ways. I shared how learners are engaged with rhetorical analysis in academic writing. In writing an effective rhetorical analysis, a writer should discuss the goal or purpose of the piece: the appeals, evidence, and techniques used and why: examples of these appeals, evidence, and techniques: and the writer should be able to explain why they did or did not work. By rhetoric I referred to the study and uses of written, spoken and visual language so learners develop an understanding of how language is used to organize, and maintain social groups, construct meanings and identities, coordinate behaviour, mediate power, produce change and create knowledge. My research that I shared revealed that successful academic writing depends on the individual writer’s projection of a shared disciplinary context. Therefore, provision of knowledge making practices enhances pursuing personal and disciplinary goals. Knowledge making practices involve:

Academic writing develops gradually, evolving into a rich and diverse body of research, texts, and pedagogies. Kennedy and Kennedy (2012) highlight the direct link between the academic reading and writing as “the focus on text and student analysis and response to text as the locus for academic writing… Developing active and critical reading skills guide students in analysing content, genre, style and organization.” Furthermore, post reading to prepare for writing involves paraphrasing, summarizing, and quoting.

By incorporating various reading, listening, speaking, media, writing and thinking strategies into freshman English, it is possible to teach through example and to make classes invigorating (Williams, Hammer, McCauley & Sullivan, 2007).

Kennedy, M.L. & Kennedy,W.J.(2012). Writing in the Disciplines: A Reader and Rhetoric for Academic Writers. Pearson:Prentice Hall.NY&London.

Jennifer Lee from the University of Rhode Island, USA discussed learner autonomy in public online forums claiming that internet texts are of continually increasing importance to composition studies since, as Anne Gere has asserted, a great deal of literacy development occurs outside of the classroom. Furthermore, quoting Kathleen Yancey’s suggestion, Lee said that many young adults develop their writing skills through their online presence more than through formal instruction, and therefore, our instruction must adopt to reflect an awareness of this. Her presentation of learner autonomy on publicly accessible, online forums for amphibian enthusiasts demonstrates that writers’ engagement with their subject matter and community facilitates collaborative learning through the process of information seeking and sharing. These results can help instructors understand students’ out of class literacy experiences on the internet, and they may further refine notions of forums as literacy tools.

Caroline Vincent from ENS de Lyon explained how on virtual communities, users meet, interact and form social ties. She claimed that these encounters, according to the participants themselves, are as strong as those that are face -to-face. She pointed out that analysing how writing serves as the unique communication medium and allows the generation of a strong social bond therefore raises academic interest. Vincent asserts that to establish a close relationship and community ties on the internet, people will be encouraged to share their emotions, which allows to organize interactions and therefore, to develop and regulate interpersonal relationships. Similarly, from a sociological point of view, expressing emotions can build role and status within a group and offset the visual anonymity inherent in virtual written exchanges (Marcoccia 2005, Vamus Vigne 2005, Hassan 2005). Hence, she says we identify the resources employed by users to compensate the lake of non-verbal communication, the implicit, and visual, auditory or kinesthetic support of emotions.

Isabel Seara from CLUML e Universidade Aberta Lisboa, Portugal initially depicted an electronic communication world as “fascinating” but “deeply disturbing”. Then, she explained how electronic communication represents a quantum leap, paradoxically and simultaneously posing several problems, linguistic, sociocultural and cultural. The frequency of the practice of SMS and the originality of this new code ask us about the likely impact of the use of SMS on general language skills of each and every student. She analyzed a corpus of SMS as a result of research conducted by Anis, Crystal, Baron among others, to identify some of the specifics of writing messages on mobile support. 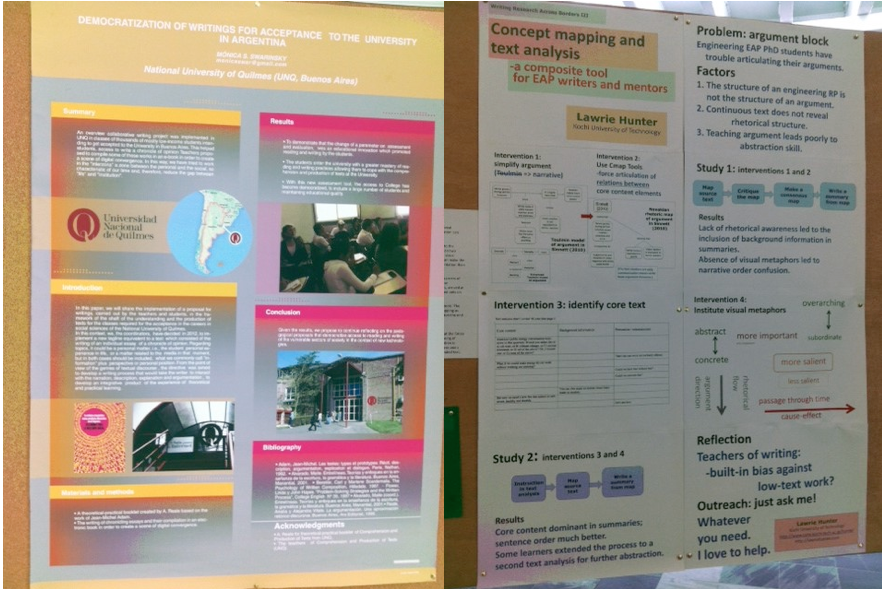 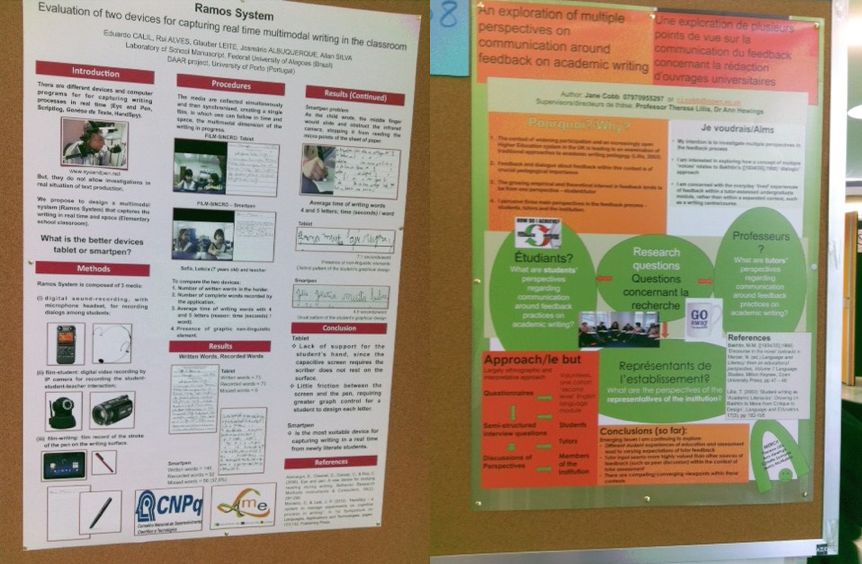 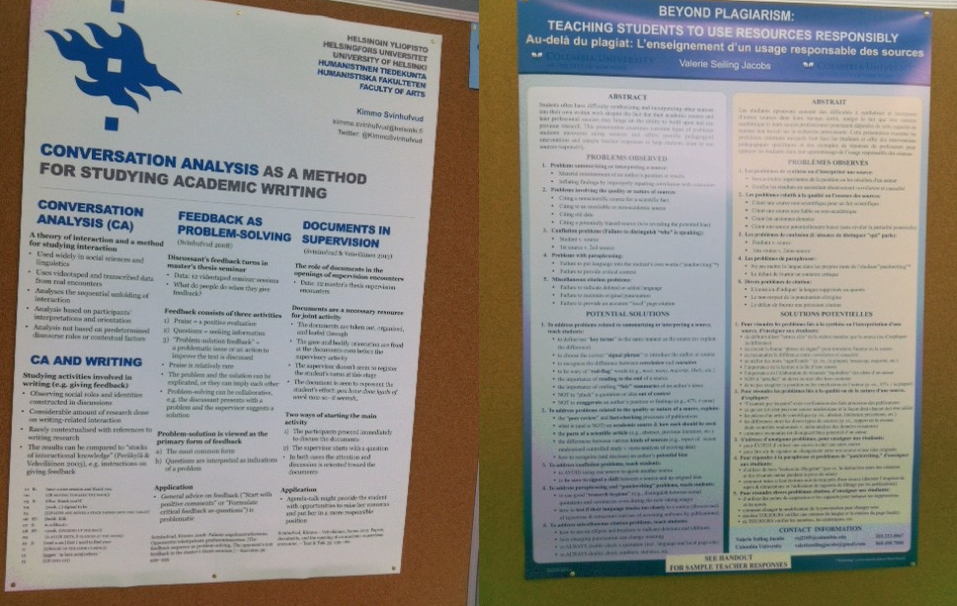